In April of 2011 I relocated myself and my business from London. With a pin in Google maps the decision was made to move to a small village, just outside Glasgow, called Croftamie. In May, BT turned up and I was officially a freelance web designer in Stirlingshire!

Over the past five years I’ve learnt a thing or two about running a business in this beautiful Scottish area, about engaging with clients and about living here too. Below are some of the things I’ve discovered along the way.

There’s a large difference between being a freelance web specialist in Scotland compared to London. Especially where I used to be based in the outer East end near the Essex border. Very few tourist businesses exist there, as very few tourists visit the area. Choosing to avoid slow commutes to the top attractions by staying further in to the capital.

At the complete opposite end of the scale, the Stirlingshire / Glasgow area homes a huge variety of tourism based businesses. Cafes, hotels, wedding venues, outdoor activity centres, beauty spots and so on. This is an incredible shift in direction for a company to take.

Of course this is not to say that Stirlingshire lacks traditional business, it doesn’t, but it does cater towards tourism in a big way.

For a freelance web design business like myself, a shift in local focus means a whole new way of targeting local business. If I wanted to stay competitive in my local area, I needed to realise the difference and adapt my strategy accordingly.
Even though the majority of my current clients would continue to be my clients, it always makes sense to target the local client base to build a name for yourself and your business. 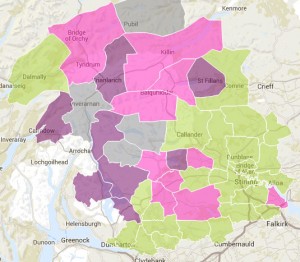 Smack bang in the grey – The current broadband situation in my area of Stirlingshire.

Sounds obvious I know, but it was one of those things that didn’t cross my mind before I left London. The fact that the current internet and mobile communications infrastructure throughout the UK is awful.

London, as with Glasgow, Stirling and most other major cities in the UK, has pretty decent access to super fast broadband and mobile networks. The further away you go from a major city, the worse the services become.

After I left London, I spent a brief respite in Norfolk, staying with family while I sorted out my plans for the big move. Parts of Norfolk are within an hour and a half’s drive from the nearest London postcode, but the digital services are notable by their lack thereof. If, and that’s a big if, you could get hold of a mobile signal, it was barely enough to actually talk to someone, and forget about large file transfers due to BT’s copper fascination.

I spent much of the my time there waiting for things to happen, files to upload, connections to be made, and this hasn’t really changed, even after moving a considerable distance north.

Much can be done to plan your day around a slower infrastructure, and normally this will have no effect on clients. Being honest and open about your local quality of digital services is the key. Never say “I’ll have that file up for you in the next ten minutes” when you know the infrastructure dictates it’ll be at least an hour.

I highly recommend a big stock of tea bags for those “Waiting to upload” moments!

If you’re based in Scotland and working in web design, web development or any internet based digital media, then the Digital Scotland Website has a fair amount of updates on the progress of bringing super fast fibre to the country. Unfortunately their interactive map makes for grim reading for me.

For all the woes caused by the sub-par broadband, there’s something Stirlingshire has in abundance, miles and miles of vast, open, beautiful countryside. From sweeping fields of crops and animals, to vast mountainous areas and miles of lochs.

The inspiration around you has a great affect on your work. Design is about coming up with fresh ideas that are both visually pleasing and usable. Having a large variety of breathtaking scenery on your doorstep provides no end of inspiration. 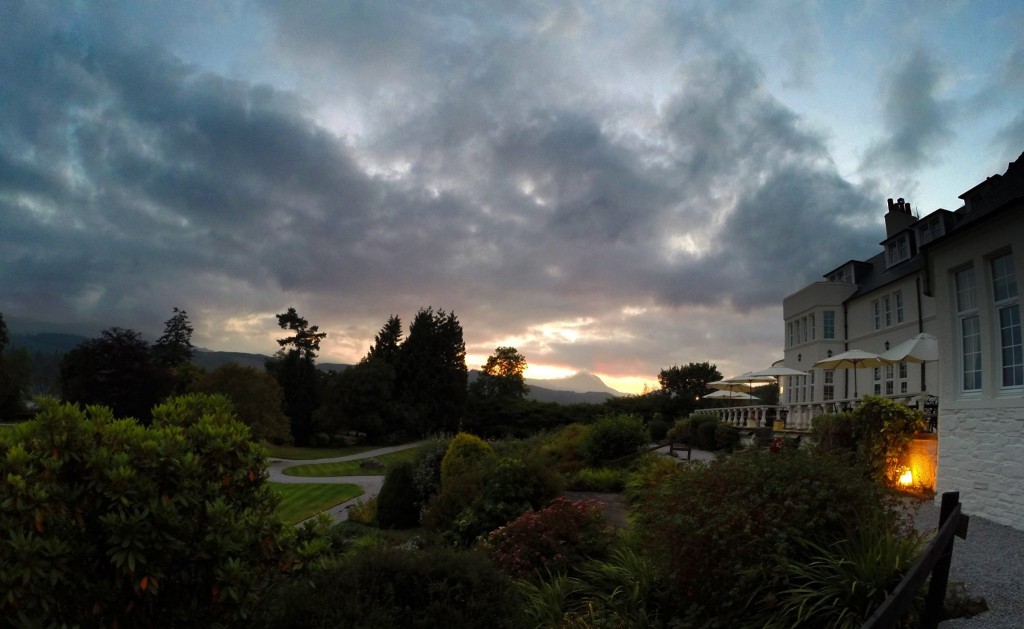 Hopping on local businesses free wireless hotspots can bridge the gap in connection if your choosing an alternate location to work from – Forest Hills Hotel, Loch Ard.

The problem with being a web designer and developer is you spend a fair amount of time sitting in front of multiple screens. The internet is a great place, but being within it all day every day wears you down.

On Fridays I have chosen to work with charities and community groups at no cost, but I’ve also chosen to do much of this work in alternative locations where possible. By ‘alternative locations’ I mean anywhere but the main Miniman Web Design office. My favourite being to grab a freshly charged laptop, throw it in a bag, jump on the bike and head up the nearest hill. The infrastructure woes I talked about earlier really kick in here, so it makes sense to assume I have no chance of a connection to a network and take everything with me. The release of just sitting up on a hill in the countryside whilst working more than makes up for the inefficient nature of this working method.

Of course it’s not all about work.

Taking time out to enjoy the area away from work is a great idea. Just wandering around with the dog or speeding through the forests on the bike, keeps me grounded, keeps ideas flowing and keeps away the approaching screen glare based insanity.

Here’s to another 5 years!

More posts from Mike: Web Design in Loch Lomond, What’s That Like Then?