One of the hardest parts of being a freelance web developer is setting up a device test bench and being able to test across a multitude of devices and platforms.

Why is a device test bench important?

Having a decent device test bench in place can mean the difference between five minutes of testing and five hours trying to test. Nobody wants to assume completion of a project, just for the client to come back the next day with a list of sticking points because you failed to run those tests across Microsoft Edge or Chrome on large screen Android devices.

Having access to a variety of platforms and devices means you’re able to instantly test for bugs and make changes to the code. Not having access means blindly applying fixes for common errors and hoping others don’t arise. Not the most reliable method of bug squashing.

Of course my device test bench isn’t perfect, there’s an iPhone shaped gap for example, but i cover as many screen sizes, platforms and devices as is physically and financially possible.

Windows 10 desktop: This is the main office workhorse and by far the device that gets the most testing.

The machine itself boasts 16GB of memory for those really heavy duty programs that like to eat away at resources (I’m looking at you, Adobe Photoshop) and a fairly decent 3.40 GHz Intel Core i5 CPU. No one likes to spend their day waiting for their machine to play catchup, at least not when they’re already waiting for their internet connection to sort itself out.

Browsers running on this machine are Edge, Internet Explorer 11 (developer mode allows access to versions 10 and below), Chrome, Vivaldi, Firefox, Canary and Opera. 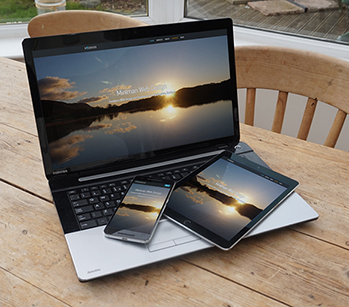 A few of my device test bench items

Of course it’s unlikely you’ll be able to cover every device in existence. There are plenty of services out there designed to fill the gaps such as Browserstack, a service that lets you test across many browsers on different devices, and Litmus for email testing. These services can be expensive if you’re just starting out.

Another great way to fill those gaps is with friends. Chances are, if you’re working in the web design industry, you’ll know other people with other devices you can test on. I’ve got a great network of buddies from tWDF and between us we own pretty much any device imaginable, all of which can be tested on within a few short minutes. A big shout goes to those guys at the end of this article.

Keeping your device test bench up to date

Of course all device test benches will be in flux. After all there’s no point keeping that XP machine, with Internet Explorer 6, hanging around, or is there?

It’s very important to make sure your contract states what devices and browsers you will support. If you’ve been contracted to develop a site and you get to the end and have it nicely tested on Internet Explorer 10 and up, but the client was expecting Internet Explorer 6 support and you forgot to mention that you no longer support that particular browser, then you’ll be looking for a device that has IE6 pretty quickly.

Unless you know without a shred of doubt that you can test and bug squash on a particular platform or browser, then don’t pretend you can. It’ll only lead to more headaches and long days in the long run.

Over time certain devices will drop out of support. At which time, retire them from your device test bench. The fewer unsupported devices you hang on to, the more energy and time you can put in to supporting modern devices.

A big shout out